About the Trucker Dump Podcast & Blog 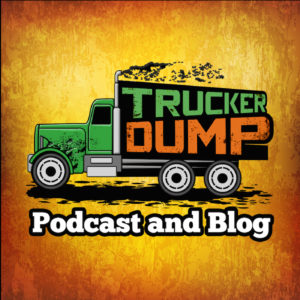 Trucker Dump is a podcast/blog that hopes to raise awareness of the trucking industry and the issues that it faces. It focuses on making the industry a better place to work and how we truckers can be perceived in a more positive light by the public.

Yes, I realize this might sound as boring as a Powerpoint on the life cycle of a dandelion. However, I try to keep things interesting by relating a story that illustrates each new topic. Every once in a while, I even manage to say something funny. Or at least that’s what I keep telling myself.

The podcast/blog covers topics ranging from trucking regulations, to driver safety, to driver etiquette, to cool apps and services for truckers. This is accomplished through a series of both monologues and interviews. You can learn from popular titles such as Coping With Rookie Drivers,  Advice For New Truckers, Winter Truck Driving Tips From An Alaskan Trucker, 4 Ways To Become A More Efficient Trucker, and Improving Our Reputations As Truckers.

The podcast version covers the blog post, but it also covers news stories related to trucking. One of my favorite parts of the show is responding to listener feedback and questions. This isn’t just a podcast for truckers either. Both the podcast and the blog have non-trucking listeners/readers. So subscribe to the Trucker Dump Podcast or Blog today! 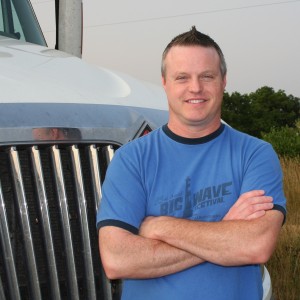 Hello there! My name is Todd McCann. I’m 50 years old and I’ve been married to a chick named Lorinda (lovingly referred to as The Evil Overlord) since 1993. I’ve been driving the big rigs since 1997. The Evil Overlord has been my co-driver and antagonist some of that time, so I have experience with both solo and team driving. We have always been company drivers and have never owned our own truck, so if you’re interested in becoming an O/O (owner/operator), you’re in the wrong place. I could tell you a little bit about it if you asked me outright, but when it comes to details I’d be as clueless as a hillbilly on a golf course.

Speaking of golf courses, golfing is one of my hobbies. At least it is when I can find time to do it. It’s a little hard when you drive a truck for a living. I like playing golf so much that I always spend an extra hour or two on the course looking for my ball.

I’m also a tech junkie and an unapologetic die-hard Apple fan boy. I’ll go on record saying that I’d rather have my tongue slowly chewed out by a subway rat than ever use another Windows machine again.

I also used to be a lead singer in a cover band back in the early 90’s. You can check out a video of us doing Immigrant Song by Led Zeppelin. Pardon the cursing. I’m not nearly as good of a singer as I used to be, but I still dabble a bit over at Singsnap. I believe I do a fairly good version of Faithfully by Journey. Blame the Internet for the video lag. And please blame your hearing loss resulting from your listening to this on your spouses incessant nagging.

As far as family goes, The Evil Overlord and I elected to be selfish and forego having kids. We’ll probably regret that decision when we’re whizzing in our nursing home beds, but for now we’re enjoying the heck out of the quiet after having our rambuctious nephews around a lot when they were younger. We don’t hate kids; we just like being able to send them back home whenever we want!

Finally, and most importantly, I’m a Christian dude who isn’t stuffy, overbearing, hateful, or a prude. I won’t even flinch if you drop an F-bomb on me, largely because I used to drop them like a B-52 drops scatter bombs. Yes, Christians like this do exist. And in case you’re worried about it, I won’t cram God down your throat, meaning I rarely talk about religion in the podcast/blog. Now having said that, if you’d like to discuss it, feel free to email me using the link below. I enjoy sharing my faith with people who can have an intelligent conversation without resorting to name-calling and insults.

If you’re feeling spunky, you can leave your comments, suggestions or opinions by going to the Contact page. Thanks for dropping in!

If you purchase both Trucking Life: An Entertaining, Yet Informative Guide To Becoming And Being A Truck Driver and How to Find a Great Truck Driving Job you’ll save 25% off the regular price.

This offer is only available here!