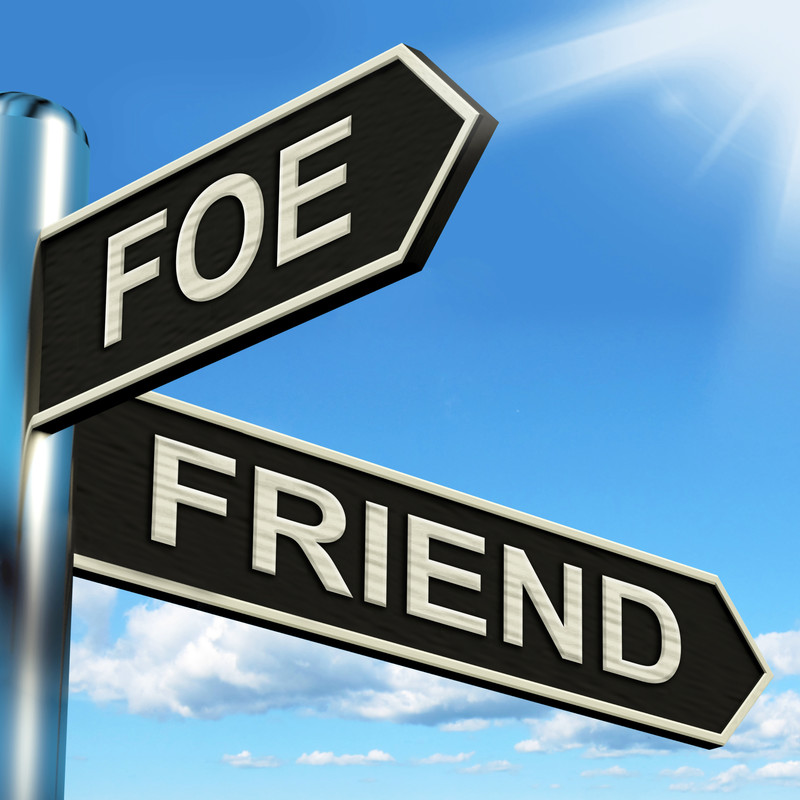 (c) Can Stock Photo / stuartmiles Recruiters have an especially bad rap within the trucking community. Most truck drivers think all recruiters are big fat liars with flaming pants. But what if that wasn’t always the case? Today I’m going to give you a different spin on this line of thinking. This post is an excerpt (actually an entire chapter) from my book, How to Find a Great Truck Driving Job. Now I don’t want to turn this into a promo for the book, but it seems as pointless as a cock-fight with furry little ducklings to not reuse something I’ve already written. So let’s get on with it.

In today’s main topic, we discuss whether trucking recruiters are friend or foe? My views on the subject might surprise you. But before that we’ve a tribute to a friend, a couple of funny videos, and DriverChrisMc will point you to some good Mexican food in the Trucker Grub segment. We’ll discuss fancy pants new trucks from Volvo and Freightliner and what’s this about a truck with no mirrors? Lots of other topics including trucker fatalities stats, a truck parking update, facial recognition for truckers, and a major construction warning in the south. And of course, we’ll talk about the trucker who got beaten by security guards and we’ll talk about what qualifies as “adverse weather conditions” when it comes to log books. We’ll also look at some length-of-haul stats and what that means, and we’re going to figure out if it’s true that truckers are considered unskilled labor. In the feedback section, David will clarify something from the last podcast about hourly pay, BSHarlan1971 leaves an iTunes review, and screaminbob weighs in on the Weight My Truck app (see what I did there) and the Trucker Path app that we talked about in the last podcast. Listen to the podcast version or read the full article and the podcast show notes on AboutTruckDriving.com. Please fill out the Trucker Dump Podcast listener survey for a chance to win a Trucker Dump t-shirt! This episode of Trucker Dump is sponsored by: Links mentioned in the podcast: Dirt Road Trucker: Episode 1 from High Grade LLC Dirt Road Trucker: Episode 2 – Opening Day of Gravel Season from High Grade LLC Fleets to begin testing all-electric Volvo VNR tractor in 2019 from OverdriveOnline.com Freightliner debuts Cascade with limited autonomous capabilities from OverdriveOnline.com No Mirror, No Problem! FMCSA Allows Cameras In Place Of Mirrors On Truckers from TheTruckersReport.com MirrorEye demo video I-59/20 in downtown Birmingham to close for 14 months from OverdriveOnline.com Michigan, Ohio expanding truck parking information systems from OverdriveOnline.com How Do Bad Driving Conditions Reflect On HOS? from BigRoad.com Record number of truckers killed in workplace fatalities in 2017 from OverdriveOnline.com TD97: A Trucker’s Worst Nightmare – Complacency TD104: Complacency Strikes Team Truckers “Attacked” By Security Guards, Charged With Assault from TheTruckersReport.com Trucker Targeted By Facial Recognition Artificial Intelligence from TheTruckersReport.com Freight’s drift toward greater regionalization: Average length of haul on the spot market from OverdriveOnline.com Truckers are classified as ‘unskilled labor’? Nope. from OverdriveOnline.com TruckerNation.org – The Trucker’s Voice Trucker Grub features Las Brisas in Charleston, MO. Submitted by DriverChrisMc, who spends enough time in Mexican restaurants that he probably speaks fluent Spanish by now. Learn more about the ebook, How to Find a Great Truck Driving Job Download the Trucking Company Questionnaire for only $1.99. Buy the Trucking Job Combo Pack for only $14.98. That’s 25% off the regular price! Links in the feedback section: David writes in with a clarification on hourly pay. BSHarlan1971 left a lovely review on Apple Podcasts. ScreamingBob listened to TD134: 3 Free Trucking Apps Every Trucker Should Have and shares his thoughts on scaling loads and finding truck parking. Show info: You can email your comments, suggestions, questions, or insults to TruckerDump@gmail.com Join the Trucker Dump Podcast Facebook Group Join the Trucker Dump Slack Group by emailing me at TruckerDump@gmail.com Join the iTruckers Slack Group if you’re a trucker who loves your Apple tech toys by emailing TheiTruckers@gmail.com Got a second to Rate and/or Review the podcast? Download the intro/outro songs for free! courtesy of Walking On Einstein
truck driving trucker trucker stories truckers trucking trucking industry trucking jobs trucking recruiters

I'm a 22-year truck driver with an interest in tech stuff. I do the Trucker Dump podcast and blog, which is all about life as a trucker. I have also written two trucking books, "Trucking Life" and "How to Find a Great Truck Driving Job."

This site uses Akismet to reduce spam. Learn how your comment data is processed.

Welcome to the Podcast!

This is the dumping ground for my thoughts on truck driving, trucking jobs, and the trucking industry. My goal is to entertain and inform both new and seasoned truck drivers on how to become better truckers while entertaining them as they keep America moving.

If you purchase both Trucking Life: An Entertaining, Yet Informative Guide To Becoming And Being A Truck Driver and How to Find a Great Truck Driving Job you’ll save 25% off the regular price.

This offer is only available here!